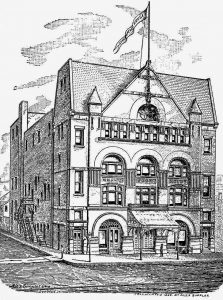 Dubuque’s historic Grand Opera House is the oldest and most “grand” of more than 16 legitimate theaters which served the community prior to 1900. In 1889 W.L. Bradley, Jr. and other local businessmen invested $100,000 to create this iconic landmark of Dubuque culture. They contracted architect Willoughby Edbrooke who had previously designed many of the buildings on Ellis Island, the US Treasury building and the old post office in Washington, DC. He selected the Richardsonian Romanesque style and chose red sandstone and Dubuque brick for construction. The 1,100 seat auditorium included 2 balconies, 8 boxes and stalls and a proscenium large enough to host major theatrical productions.​

Touring Broadway shows were always popular. When the producers of No No Nanette decided to do a Midwest preview they selected Dubuque’s Grand Opera House. For several years the Grand Stock Company produced a new play every week. A legendary production of Ben Hur featured live horses and chariots on a treadmill. The Garden of Allah featured a large cast, an Arabian orchestra, plus camels, donkeys and a sandstorm created on stage. 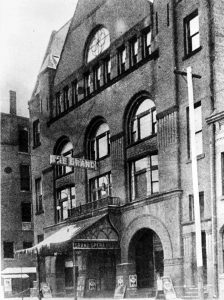 Theater historians say during that “Golden Era” Dubuque saw more big shows than any other city of comparable size in America. Between 1890 and 1928 the Grand hosted more than 2,600 live performances.

As movies became more popular the Grand installed a “fly-in” screen in 1915 and began showing silent films with piano, theater organ or small orchestra accompaniment. In 1928 with live theater receipts diminishing and film revenues on the rise a decision was made to convert the Grand into a full time movie house. When The Merry Wives of Windsor closed on March 14, 1928 a major remodeling project began. The second balcony and glamorous box seats and stalls were removed. The fly space for scenery above the stage was closed off and the orchestra area covered over to make room for more seating. A massive air ventilation system filled the rehearsal area and dressing rooms on the lower level. Two large fireproof projection rooms replaced the 2nd floor dressing rooms and hallway to the 2nd balcony. Dubuque’s Grand Opera House became the Grand Theater and a new era began. 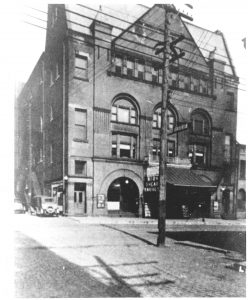 For 58 years Dubuque enjoyed the best of Hollywood from the same stage where the greats of live theater once performed. A marquee typical of the era was added in the 1930s. In the 60s a “modernization” project covered the beautiful red sandstone with tile and aluminum. A barbershop occupied a section of what is now the restored main lobby. And the popular Grand Grille next door, now a parking lot, became the offices of Dubuque Savings & Loan. As the modern “Cineplex” theaters opened on Dubuque’s west side the Grand began showing 2nd and 3rd run films for $1.00. In 1985 it was closed and remained vacant, but not for long.

Under the leadership of a local teacher, Sue Riedel, the Barn Community Theater had been producing plays in a remodeled barn located on Dubuque’s west side at Flora Park since 1971. This visionary civic group developed a new business plan, created a funding campaign and purchased the theater for $86,000. For several months hundreds of volunteers worked thousands of hours to renovate the building to make it usable again for live productions. On the evening of August 14, 1986, 96 years after the original opening night, the new Grand Opera House reopened to an enthusiastic audience with the musical Tintypes. Live theater had returned to The Grand. 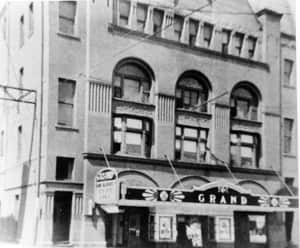 In 1998 the Board of Directors launched another campaign to complete renovation and accurately restore the building to the look of the 1890s. The architectural firm of Straka – Johnson was hired to design and supervise the restoration. Donations large and small came from hundreds of area residents, companies and corporations. Major contributions were pledged by John & Alice Butler, the Falb Family Foundation, the Woodward Foundation and others.

In 2001 the Grand earned a place on the National Register of Historic Buildings. To increase our handicap accessibility a glass elevator was added to the building in 2010. And that summer, the Dubuque Academy of Ballet moved their office and rehearsal space to the 3rd and 4th floor of the Grand.

In 2014 a significant bequest from the estate of Ervin and Alice Hafeman allowed us to restore the orchestra area that had been closed off since 1928. Musicians now will perform on a level about 6 feet lower than the main floor auditorium, providing super acoustics for musicals and unobstructed sight for persons sitting in the first few rows of seats.

The Grand Opera House Foundation, a non-profit corporation owns this magnificent facility. A board of directors provides guidance to our paid staff and a large roster of dedicated volunteers. Funding is provided principally by ticket sales, plus an annual campaign, show sponsorships, playbill ad sales and rentals.

As 21st century audiences enjoy this beautiful theater it is a living tribute to the heritage and traditions of past generations of actors, musicians, choreographers, costumers, stage hands, set designers, managers and the visionary leaders of 1890 who created Dubuque’s Grand Opera House.